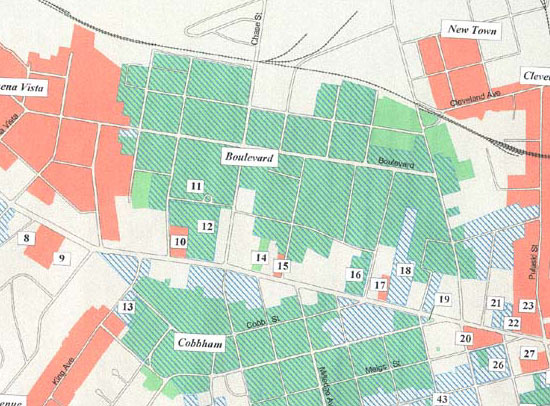 The Historic Boulevard Neighborhood Association boundaries extend from Pulaski to Pound and from Prince to the rail road tracks. Within this lies the historic district.

The Boulevard Historic District is the area roughly bounded on the south by Prince Avenue, on the west by Hiawassee Street, on the north by the Seaboard Coastline Railroad (now CSX), on the east by Pulaski Street.
This streetcar suburb is named for Boulevard, its widest street, which runs east/west through this 150 acre district. Laid out in a gridiron pattern on slightly rolling terrain behind the capital mansions on the north side of Prince Avenue, this residential district consists mostly of late-nineteenth and early-twentieth century houses built primarily for blue collar and middle class families. Wood is the principal building material of these one- and two-story houses, which display influences of Greek Revival, Queen Anne, and Neoclassical styles and the Bungalow and American Foursquare forms. In general, the houses built along Boulevard were more elaborately detailed than the smaller, more modest homes constructed elsewhere in the district. Except for several non-contributing homes and apartment buildings and business structures around the intersection of Chase Street and Boulevard, the historic district has had few intrusions. Many of the trees planted along Boulevard when the suburb was laid out still shade the broad avenue.
Much of the land in this district originally belonged to the mansions along Prince Avenue. When Athens gained a streetcar line in the 1880s, suburban living in several areas near town became far more convenient. This prompted a group of private developers, known as the Athens Park and Improvement Company, to acquire the area north of the Prince Avenue mansions for the city's first streetcar suburb. Beginning in 1898 they laid out the Boulevard suburb. The streetcar line, extended from Prince Avenue out Barber Street and westward down Boulevard in this decade, connected the neighborhood with downtown and stimulated its rapid growth. The developers reserved the north side of the district beyond the railroad tracks for industrial development, and when the Southern Manufacturing Company arrived at the turn of the century, the company constructed a mill village there for the mill workers. The west end of Boulevard developed in such close proximity to Normaltown and the Buena Vista area that the latter is often referred to as West Boulevard. Having recognized the value of their historic resources by the 1980s, residents of the Boulevard area petitioned for local designation in order to protect the historic neighborhood from further intrusions.
Several sites within the Boulevard district merit individual recognition; these include the Chase Street School, the University of Georgia President's House, and the Taylor-Grady House *. Other properties of distinction are the Barrow Street Area, the Booth-Morris House, the General Howell Cobb House, and the Emmanuael Episcopal Church *. The National Register district includes more than the local district, whose eastern boundary runs north-south along Barber Street, excluding the Pulaski Heights area.
The Boulevard Historic District is listed on the National Register of Historic Places (April 18, 1985) and has been locally designated as a Historic District (October 4, 1988).

Download a Slideshow of Neighborhood History
Our association is managed by a Steering Committee, which serves as a board of directors in making decisions and representing the neighborhood.